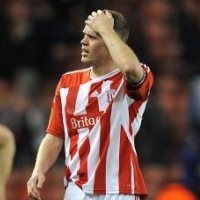 Stoke will have to win in the Mestalla next week if their European adventure is to continue after Valencia shaded the first leg of their Europa League last-32 clash at the Britannia Stadium tonight.

Mehmet Topal netted the only goal of the game in the 36th minute with a 30-yard screamer that gave Asmir Begovic absolutely no chance.

Sofiane Feghouli also hit the post in the second half while Stoke, who have lost their past four Barclays Premier League games, were limited to half chances.

Potters boss Tony Pulis described the tie as one of the greatest occasions in the club’s history and there was certainly a big difference between the teams in terms of experience, with Valencia playing their 100th game in the Europa League or UEFA Cup compared to Stoke’s 15th.

Los Che won the competition in 2004 and are once again the best of the rest in Spain this season, sitting third behind Real Madrid and Barcelona.