Excitement was scarce in the first half, with little creativity from both sides. 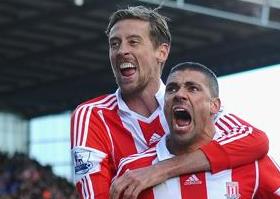 Santi Cazorla had Arsenal’s best chance towards the end of the half, shooting straight at Asmir Begovic from outside the box.

A minute before, Glenn Whelan sliced a shot towards the corner of the goal, also from distance, but Wojciech Szczesny palmed away smartly.

Predictably, Stoke attempted to injure Arsenal players, as Erik Pieters ploughed through Olivier Giroud with a late challenge, Whelan stamped on the striker earlier, and received no punishment at all.

Also in the first half, Charlie Adam planted his studs on Mikel Arteta, and could have seen red.

In the second half, Peter Crouch had a fantastic chance to head, unmarked, past Szczesny, but wasted a great Adam cross by kicking the ball straight into the air.

Crouch then engineered Stoke’s best chance, toeing a dropping ball back to Geoff Cameron to blast a yard wide.

On 68 minutes, Adam should have seen red for stamping on Giroud, but the referee was consistent in his incompetence.

Incompetence was the watchword of the match, as Laurent Koscielny handballed a Walters’ high ball, and kneed the winger in the chest, conceding a penalty.

It was Walters who calmly slotted home the penalty to win the game.

In added time, Yaya Sanogo fired miles over when in space, but Stoke clearly deserved their victory.