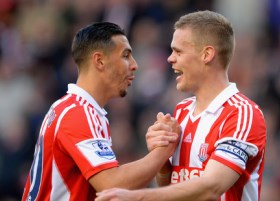 Arsenal have only scored in the first half of three of their last 14 Barclays Premier League matches.

Arsenal have won none of the last four trips to the Britannia Stadium (W0 D2 L2).

Stoke have scored the joint-fewest headed goals this season (2).

The Potters have committed more fouls than any other team in the Premier League (360) and picked up the most cards (60 yellows and three reds). Arsene Wenger Delighted With The Progress Of Serge Gnabry