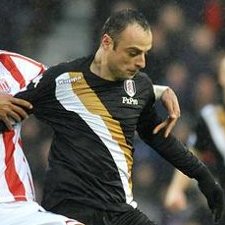 The Scotland midfielder poached his second goal for the club after good work from Peter Crouch, and it was enough to hold off the visitors, who were below their best but improved late on.

In heavy rain and swirling wind, Fulham were unable to get their collective foot on the ball, while the Potters enjoyed the conditions with their trademark direct approach.

That paid off for Adam’s goal, and they should have had more but for some poor finishing and some good stops by Mark Schwarzer, although the Fulham keeper struggled with the high ball on several occasions.

Fulham did improve later on but Asmir Begovic was only truly tested on one occasion, keeping out a Dimitar Berbatov effort, while a stern rearguard action was needed in injury time as the home side closed out victory.

The result pushes Tony Pulis’s side into mid-table, while the Whites sit ahead of them on goal difference.