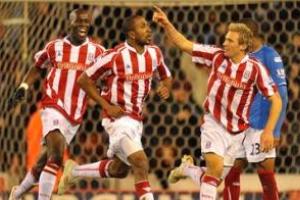 Ricardo Fuller netted his first Premier League goal of the season to give Stoke a narrow 1-0 win over Portsmouth at the Britannia Stadium.

The Jamaican’s well-taken goal on 74 minutes proved the difference between the two sides after Kevin-Prince Boateng had missed an early penalty for Portsmouth.

Victory for Stoke saw them leapfrog Burnley into ninth place, while Pompey remain rooted to the bottom of the table, three points adrift of Wolves in 19th.