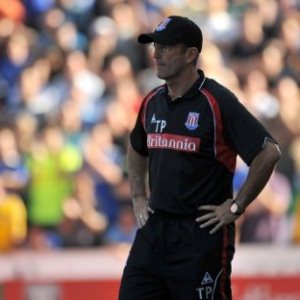 Chelsea were held to a 1-1 draw by Stoke City as Carlo Ancelotti’s side came from behind to salvage a point in their Premier League encounter at the Britannia Stadium.

Jon Walters gave Stoke an eighth-minute lead with an inspired individual effort which saw him jink past two Chelsea players before finding the back of the net with an emphatic finish.

But the Blues were level just after the half hour mark as Nicolas Anelka’s deft delivery from the left picked out strike partner Didier Drogba, who headed a precise finish beyond Asmir Begovic to level the scores.

Fernando Torres was confined to the substitutes’ bench as Drogba spearheaded a three-pronged attack with Florent Malouda and Anelka either side, while Stoke employed Walters in support of lone striker Kenwyne Jones.