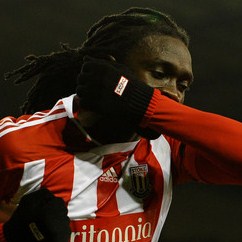 Kenwyne Jones’ late header secured Stoke the point they needed in a 1-1 draw against Dynamo Kiev to book their place in the knockout stages of the Europa League.

It was a classic game of two halves at the Britannia Stadium, with the visitors dominating the first period and deservedly taking the lead in the 28th minute when Oleksandr Aliyev’s shot was turned into his own net by Matthew Upson.

But Stoke rallied after the break and finally found the equaliser nine minutes from time when Jones nodded in Jermaine Pennant’s cross.