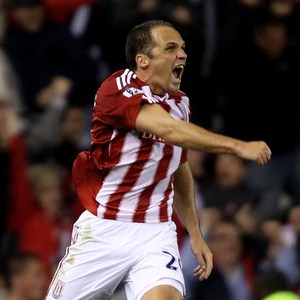 Defender Robert Huth snatched an injury-time winner as Stoke came from behind to beat Aston Villa at the Britannia Stadium and get their season off and running.

Manager Tony Pulis missed the first half after the death of his mother earlier in the day but he returned at the interval to inspire the revival.

Stewart Downing put the visitors in front with a precise diving header, before the Potters’ record signing Kenwyne Jones opened his account for the club with an 81st minute equaliser to set up an enthralling finish as Huth stole all three points for Tony Pulis’s side.