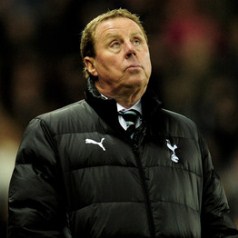 Tottenham Hotspur suffered their first defeat in 12 Premier League games when they were beaten 2-1 by Stoke City in a thrilling and controversial match at the Britannia Stadium.

Former Spurs player Matthew Etherington scored twice in the first half with two goals that came as a result of the Potters’ trademark long throws. The club’s main exponent of those set plays, Rory Delap, was not playing, but in his stead Ryan Shotton provided the airborne assault that led to Tony Pulis getting the better of his former manager Harry Redknapp.

Emmanuel Adebayor pulled a goal back for Spurs after half-time from the penalty spot, but their hopes of claiming a result were hit when Younes Kaboul was sent off with eight minutes remaining for a second bookable offence.

The visitors had several appeals for handball in the box turned down, but referee Chris Foy declined to give Spurs a second spot-kick.

Stoke’s third win in a row sees them move up to eighth in the table, while Tottenham remain five points behind second-placed Manchester United after a run of six consecutive wins was brought to an end.

Redknapp : Modric Is Happy At Tottenham