Reports are out claiming that Stoke City manager Mark Hughes insists any speculation linking him with the Chelsea job is no more than a simple comment. 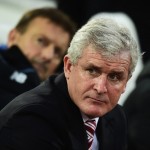 The Guardian reported on Wednesday that the Blues are seriously considering the Welsh tactician who spent time at Stamford Bridge as a player between 1995 and 1998.

Hughes’ name is amongst a shortlist that includes Diego Simeone, Mauricio Pochettino, Massimiliano Allegri and Antonio Conte but he has played down the the talk by suggesting it is nothing serious.

“There is a little bit of speculation about certain roles in the Premier League at the moment and, at some point, if you have a decent spell, you get mentioned,” said the former Wales, Blackburn Rovers, Manchester City, Fulham and QPR boss said.

“I think it is no more and no less than that. I think everyone just tries to cover all bases and mentions everybody, and this week I got a mention.

“It’s nice to be mentioned I suppose, because that reflects well on me, but more so on the players and how well they are doing, which is how it should be because we are having a decent season.

“But we are fully focused here and enjoying what we are doing. It is a good time to be at Stoke. Everybody feels we are going in the right direction and building something. So I’m very happy.”