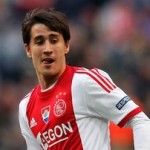 It has been reported that Stoke City has signed Bojan Krkic from Barcelona on a long-term deal.

The Potters have confirmed the capture of the Spanish forward on a four-year deal for an undisclosed fee.

The 23 year old ends his second spell with Barcelona where he returned from AC Milan last summer, spending the 2013/14 season on loan with Dutch giants Ajax. Sergio Busquets Proud To Reach Game No.300 For Barcelona

Alex Ferguson : It Would Be Difficult To Sign Cristiano Ronaldo!