It has been reported that Ibrahim Afellay has completed his move to Stoke City. 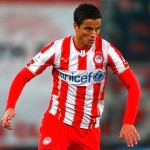 The Dutchman joins the Potters as a free agent after coming off contract at Barcelona.

Afellay, 29, has signed a two-year contract with the Barclays Premier League club and will link up with his new team-mates in France.

Potters chief executive Tony Scholes told his club’s official website: “It’s no secret that Ibrahim was wanted by a number of clubs and we are understandably delighted that he has chosen to join us.

“He’s clearly excited about the prospect of playing in the Premier League and the fact that he knows so many players who are already at the club will no doubt help him settle into his new surroundings.”