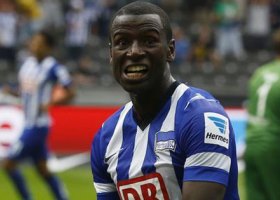 It has been reported that Hertha Berlin striker Adrian Ramos is interesting Stoke City.

The Daily Mail reported that the Colombian was the subject of a bid from West Bromwich Albion back in August, while Hull City also made an enquiry.

Both were put off by Hertha’s asking price and the Germans still want up to £7million for a player who has scored 11 goals in 17 games, including four in his last three.