It has been reported that Stoke City have pulled back from talks with Liverpool for Oussama Assaidi. 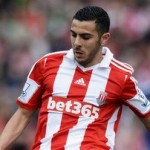 The Sentinel reported that their pursuit of Assaidi is on hold while the winger tries to find a long-term cure for the knee issue which de-railed his season.

Nothing will happen until the wide man is able to prove he can last the distance in the Premier League.

The 25 year old Morocco international is currently in the Netherlands receiving treatment on a ligament problem stemming from a training injury picked up in Dubai in February. Gerrard : Liverpool Have The Most Feared Strike Force In The League!