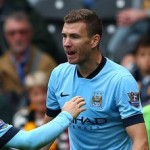 Reports are out claiming that Stoke City’s board are ready to support Mark Hughes’ move for Manchester City striker Edin Dzeko.

The Sentinel reported that the Bosnian international star remains a long shot, but Stoke are determined to explore every reasonable avenue to bolster their ranks before the end of the January transfer window.

Chairman Peter Coates said: “Names have been discussed and we will see where that gets us.

“I cannot say we are close to anything at the moment, but we are all eyes and ears, and the end of January is a long way off.

“We are not just looking at players to do us a job between now and the end of the season. If the right player becomes available for longer-term then we will obviously look at that too.”