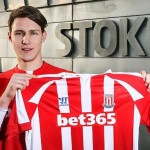 It has been reported that Stoke City boss Mark Hughes may play new signing Philipp Wollscheid against Arsenal on Sunday.

But Hughes said: “He’s up to speed in my view and having seen him in training this week he looks in good shape. He’s an option.

“It’s big decision to throw him in the deep end against a team the quality of Arsenal, but he’s an option.” Jack Wilshere Eager To Start For Arsenal Against Norwich