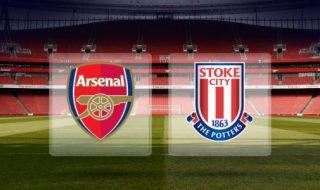 Arsenal will keep their success spree going when they’ll meet with Stoke City on the Britannia Stadium on Sunday. That’s a no-brainer as the opponents are not even close to being equally matched. Or are they?

It does seem like Arsenal has all of the necessary advantages at disposal and they are the team most people will bet their money on. But just look at the stats:

And yet Arsenal is in peek shape this season and they’ve already proven their worth, will and level of preparation during this season’s showdown. Perhaps the red devils stand a vivid fighting chance? All in all I can freely bet football will be remarkable on Sunday.

It is a sad fact but Xherdan Shaqiri will probably maintain his seat on the bench just like he did in the game against Norwich because of his hamstring injury. This means we are stuck with Walters alongside Joselu for at least one more game. Arnautovic and Bijan will push onward with the attack as well.

Potters, while somewhat lacking in the skillet of their attackers have prepared a mighty wall of defenses with Pieters, Shawcross and Wollscheid.

A lot of media and a lot of fuss is recently orbiting a single rumor: we are constantly told that the Frenchman will release Alexis Sanchez into the field to even up the odds. The game is, after all, rather curtail to the Gunners.

But let’s be realistic here. Even after the 3-3 at Anfield against Liverpool Arsene Wenger will never allow an unprepared player on the field. Rumors are just word and nothing more. At least under given conditions and game play mechanics.

Arsenal will head their attack with Giroud, Walcott, Campblell and Ozil. The matchup is indeed powerful enough to break a hole in a brick wall. Will they be enough to take on the Potters on their home field?

All of you willing to bet on the game choose the smart, safe game plan: double chance for Stoke. Yes Arsenal was proving their worth over and over again this season but the stats don’t lie. Just look at their track record. Stoke City will end up victorious.