Reports are out claiming that Stoke City boss Mark Hughes is insistent that West Ham target Peter Crouch remains a big part of his plans. 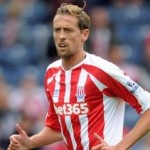 It is said that Hughes is delighted to see the 33 year old staying put, rather than moving to Upton Park, although the Potters boss insists he never took their reported interest too seriously.

“I think (the Crouch rumour) is probably agents being agents and perhaps managers being a little bit mischievous to be perfectly honest. I’d take it with a pinch of salt,” he said.

“Nothing has changed with Pete. I’m trying to make this squad stronger, and he’s a big part of that. He was great last year and we want to keep quality players.”