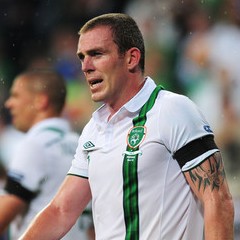 It has been revealed that the future of Aston Villa defender Richard Dunne remains clouded.

The Express & Star reported that the 32 year old Ireland international defender is out of contract next summer and was strongly linked with a £3m switch to Stoke in the last transfer window.

The move never materialised and Villa boss Paul Lambert recently confirmed that Dunne is still in his plans. Should Theo Walcott Start Up-Front For Arsenal Every Week?