It has been reported that Stoke boss Mark Hughes is keen to sign Liverpool winger Oussama Assaidi on a permanent basis. 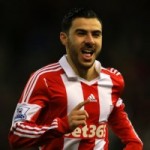 The 25 year old Morocco winger spent the season on loan at the Britannia Stadium from the Anfield outfit, making 25 appearances in all competitions and scoring five goals.

Hughes told The Sentinel: “The ball is very much in Liverpool’s court because he is their player.

“I’m not saying I know what they are thinking, but I would imagine that being in the Champions League they will spend more money this summer.
“And that could go against Ossie having a place there.

“He is their player and we mustn’t forget that, but yes we are hopeful of keeping him here.

“It’s fair to say that he’s enjoyed his time with us and we have enjoyed having him here.”

Simon Mignolet Is Only Going To Get Better! – Brendan Rodgers