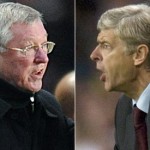 The Arsenal boss has been the subject of disgusting and baseless ‘paedophile’ chants by United followers for a number of years.

And with Ferguson also unhappy in recent years about his treatment at the Emirates Stadium, the Scot has called for a line to be drawn between match-day banter and intolerable abuse ahead of Sunday’s match between the Barclays Premier League high-flyers.

‘It is unavoidable that managers do get abused,’ he said. ‘I get it myself. Most managers do.

‘Sometimes I can’t hear these chants, or make them out but it has to be controlled.’

Ferguson delivered his plea 48 hours after praising United’s supporters to the hilt for the part they played in their team’s Carling Cup victory over Manchester City at Old Trafford on Wednesday.

Then, the Scot said if the champions received similar backing throughout the season, they would hardly lose a game.