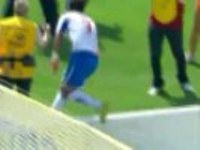 This incident happened during the match between Bahia and Flamengo in Copa Sao Paulo de Futebol Junior final. Bahia lost the match.

The first incident happened when Bahia striker Rafael is violently taken out by a double head kick. After taking the double blow to the head, Rafael falls to the ground and the referee awards the penalty.

Rafael then takes the penalty himself and successfully converting the spot-kick. What happens next is truly amazing. Rafael who was delighted to have scored runs off to celebrate and nearly kills himself as he jumps across the railing and falls down the tunnel.

However the young striker manage to pick himself up and continue celebrating. It is just amazing and unbelievable that he did not end up in the hospital.