Reports are out claiming that Stromsgodset whizkid Martin Odegaard is delaying a decision over his next move. 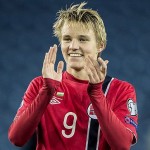 After spending last week with Liverpool, the 15 year-old has met Arsenal officials in recent days.

Voetbal International reported that Odegaard is scheduled to visit and train with Ajax in January.

Norway coach Per-Mathias Högmo recently said: “He has two choices. Whether he goes to a mid-range club that helps his development, such as Ajax, or he goes directly to an absolute top club.

“You can see that most players that take the second route don’t usually succeed.” AS Monaco To Make One Last Attempt To Lure Arsene Wenger