Daniel Sturridge has admitted that he can’t replace Luis Suarez at Liverpool on his own. 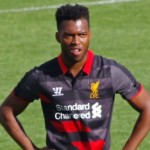 The England international striker has warned that his team-mates must up their game too.

“This is a huge club with a lot of players who can step up,” said Sturridge.

“I wouldn’t say it’s by default that I’m the main man.

“As a team we will move forward, I wouldn’t say I’m the main man. We are going to do our best to move forward.

“It was a unique partnership with Luis. We shared some good times together.

“We created history with our goals but in terms of next season for the goals, I’ll step up myself and everyone has to step up to get the goals because it is a long season.

“It is everyone’s job to step up. The new boys who have come in, as well as the players who have been there all season.”