Reports are out claiming that VfB Stuttgart defender Antonio Rudiger is aware of interest from Manchester United. 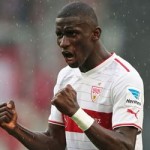 Rudiger, who attracted enquiries from West Ham United earlier this summer, has been watched by United in the opening weeks of the new Bundesliga season.

“I know about Manchester’s interested, I’ve noticed it,” he told BILD.

“This is of course is a top international address. And they play in the League which I dream of.”

Man Utd Convinced Of Signing Cristiano Ronaldo In The Summer