Reports are out claiming that VfB Stuttgart chief Robin Dutt is inviting buyers for Timo Werner. 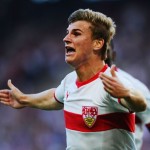 The Germany U19 striker attracted enquiries from Tottenham last month, while he was also linked with Arsenal and Liverpool.

BILD reported that Dutt now hopes to revive sale talks ahead of the January market.

Werner has fallen out with new Stuttgart coach Alexander Zorniger, who is now playing the youngster off the bench.

“I’m here to say, that’s enough. Even if he has around him enough people who disagree. I’m not his nanny!” responded the coach to criticism over the lack of action Werner has seen this season. Marco Reus Ruled Out Of Champions League Clash Against Arsenal