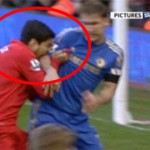 The incident occurred in the second half of Liverpool’s 2-2 draw against Chelsea at Anfield on Sunday.

“I’ve spoken to Ivanovic on the phone and I could apologise directly to him,” Suarez tweeted. “Thanks for accepting.”

In an earlier statement, he said: “I apologise to my manager and everyone at Liverpool for letting them down.”
Blues defender Ivanovic, 29, complained to referee Kevin Friend that he had been bitten on his right arm by Suarez after their clash inside the Chelsea penalty area.
“Having reviewed the video footage and spoken to Luis, his behaviour is unacceptable and I have made him aware of this,” said Reds manager Brendan Rodgers.