Liverpool striker Luis Suarez feels that they have shown up their big spending rivals this season. 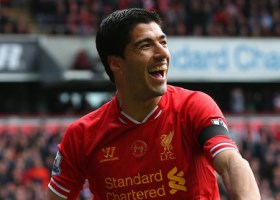 The Uruguay international striker thinks the likes of Manchester City and Chelsea are expected to do better because of the number of star players they have.

The former Ajax star said : “[Winning the title] would be something that no one would believe,”.

“Because we have good players but if you look at the complete roster, we don’t have [the players] to be up there.

“The truth is that we are surprised ourselves at how well we’re playing.

“We have good players who are demonstrating why they are in Liverpool and it would be something amazing even to England because of the investment made by Chelsea, [Manchester] City and Arsenal.

“Even Tottenham have spent over €120m (£100million) and we, with so little investment, are in that position,” Saurez said in the Guardian.

“It would be incredible.”