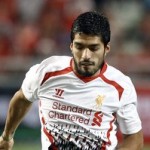 Brendan Rodgers has revealed that Luis Suarez understands Liverpool’s decision to reject a £40 million offer from Arsenal for him.

It is said that the Reds have rejected two bids from Arsenal, the latter being the widely-reported £40million plus £1, which the Gunners believed would trigger a sale clause.

Rodgers told the Liverpool Echo : “It’s a story that can keep running but for me there is no new news,”.

“Luis is happy. He totally understands the club’s point of view.

“He’s in a difficult position in terms of not being able to play because of his suspension – he will sit out the first six games and he will miss playing football.

“But he’s working hard and remains part of the group. He hasn’t been moping about.

“It’s obviously difficult when you come back after a break but he has settled in and has been working well.

“He needs to get up to speed and we will continue to work to get all the players ready for the first game of the season.”