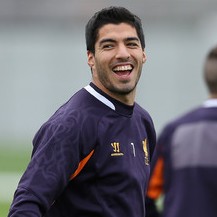 prepared to leave Liverpool for a Champions League club and with Bayern Munich always knocking on the door the move may happen this summer.

Speaking in his homeland before Friday’s World Cup qualifier against Paraguay, Suarez refused to rule out leaving Anfield in the summer.

“I am very happy at Liverpool but you never know in football,” he said in quotes picked up by the Liverpool Echo.

“I’m in a world-class team, an elite team like Liverpool. We have to realise we have a new manager who is imposing a philosophy and a way of playing that the players are adapting to as best we can. We hope that it will bear fruit next year.

“If another team comes around with more prospects of competing in international club competition games, which is willing to have me, they are welcome.

What we have learned from the Ronaldo,Beckham,Balotelli etc transfers is that when a player uses the magic words like “I am very happy at my club but you never know in football” then the player is definitely on his way out.