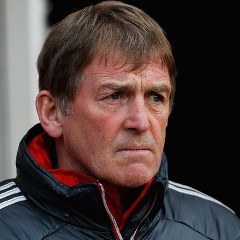 Liverpool’s league travails continued with another toothless performance as they lost 1-0 away at Sunderland to remain five points behind Newcastle in seventh place in the Premier League.

Kenny Dalglish’s side have now won just one of their past eight games to see their hopes of a top-four finish dissipate, and will have renewed concerns about the potency of their attack after a third defeat in succession – the first time they have suffered such a poor run of form in the Premier League since October 2003 and the reign of Gerard Houllier.

Though the manner in which they conceded was unfortunate – Nicklas Bendtner tapping home after a shot from Fraizer Campbell had hit post, Jose Reina and then post again – Liverpool were lacklustre throughout against a robust and determined Sunderland side.

A victory for the home side saw them return to winning ways at home in the league following a loss to Arsenal at the Stadium of Light last time out, with Martin O’Neill’s men moving to within two points of their opponents as a result.