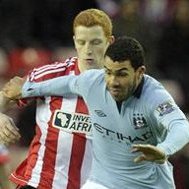 Adam Johnson landed a Boxing Day blow to his former club’s Premier League title hopes by scoring the only goal as Sunderland beat Manchester City 1-0 at the Stadium of Light.

Helped by a Joe Hart error, the former City winger’s effort crept in at the near post to give the Black Cats a famous win at home to the champions in an otherwise nondescript affair.

City piled men forward late on, with Hart twice coming up for corners, but Sunderland could have snatched a second as they deservedly went 13th, well clear of the drop zone.