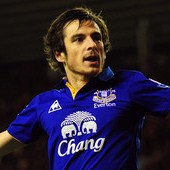 Sunderland and Everton shared the spoils after drawing 1-1 in a pretty turgid affair at the Stadium of Light.

Substitute Jack Colback opened the scoring for the Black Cats after 26 minutes, before a controversial penalty awarded early in the second half was put away by Leighton Baines.

Everton had chances at the death to take all three points, but it was the Sunderland players who were left fuming after that iffy penalty call.

The opening period was short on incident and enlivened only by a couple of flashes of brilliance from Sunderland’s Stephane Sessegnon.