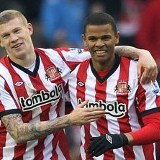 Fraizer Campbell made a sensational return from long-term injury as he scored in Sunderland’s 1-1 FA Cup fourth round draw with Middlesbrough at the Stadium of Light.

The forward had not played since August 2010 due to a persistent knee injury, but took just 13 minutes to find the net after coming on as a half-time substitute.

The replay will take place at Middlesbrough’s Riverside Stadium on Wednesday, February 8.