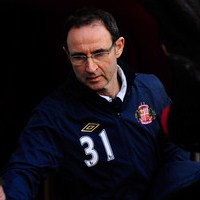 Sunderland continued their resurgence under Martin O’Neill with a 2-0 win over Swansea in the Premier League at the Stadium of Light.

Brilliant strikes either side of half-time from Stephane Sessegnon and Craig Gardner was enough to earn O’Neill his fifth win in eight matches since taking charge in December.

Swansea will feel they deserved more from this game after dominating possession but they were unable to breach the home side’s defence.

The defeat brought Brendan Rodgers’s men crashing back down to earth after their stunning win over Arsenal last week.

The Welsh club have the worst away record in the league, having taken six points – winning one, drawing three and losing seven of their 11 games on the road.