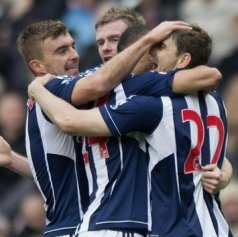 West Bromwich Albion went third in the Premier League with a 4-2 win against Sunderland at the Stadium of Light.

Zoltan Gera curled in a brilliant 20-yarder just before the half-hour mark, then Simon Migonlet’s inexplicable failure to hold a routine through ball allowed the alert Shane Long to finish into an empty net.

Craig Gardner pulled one back with a deflected free-kick before Romelu Lukaku restored the two-goal cushion from the penalty spot.

Stephane Sessegnon then smashed in a close-range effort, before Marc-Antoine Fortune had the final word for West Brom, scoring with the last meaningful kick of the game.

Steve Clarke’s men leapfrog his former club Chelsea after notching up their eighth win of the season.

It is the first time West Brom have won four straight top flight games since October 1980, when they finished the season fourth.