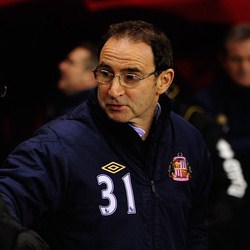 The 24-year-old, who marked the end of his injury misery with a goal on his return to action on Sunday, needed just 21 minutes to double his tally for the season with a sumptuous volley which set the Black Cats on their way to a resounding Premier League victory.

Stephane Sessegnon added a second seven minutes later and the points were safe nine minutes into the second half when Phil Bardsley’s cross ended up in the back of the net with the help of deflections off defender Daniel Ayala and keeper John Ruddy.

The win extended manager Martin O’Neill’s run since he replaced Steve Bruce to just two defeats in 11 games in all competitions and extended his side’s points tally to 30 – one more than tonight’s visitors – to the delight of a crowd of 34,476.