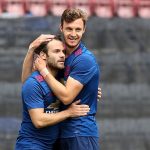 It has been reported that New Sunderland boss David Moyes is eyeing Manchester United striker Will Keane.

The Sun claims that United are ready to cash in on Keane – with old boss Moyes lining up a £6.5m bid at Sunderland.

The 23-year-old – who is also attracting interest from Stoke – is believed to want to quit Old Trafford in search for first-team football.

A United source said: “Keane would cost about £6.5m but with potential add-ons in the future.

“He has gone on the tour of the Far East but not really spoken to Jose yet about his role. He scored last week at Wigan.”