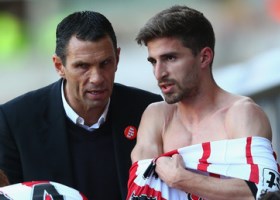 The 22 year old Italian striker, on-loan at Sunderland from Liverpool, has been touted to Serie A clubs by his agent this week.

Poyet said: “I would like to talk to him, not agents. He is a very important player for us and he has been unlucky because, if there is one player who should have got a bit more from the manager, it is Fabio.

“I’ve only been here a month and a half so not everything needs to be decided now.

“If I was him I’d be moaning, but he has got great character and we have got a very good relationship.

“Every player wants to play all the time and I’m sure his family are thinking, why doesn’t he manager play him? He has done well and is probably the one who has been really unlucky with the situation in games.” Ricky Alvarez Determined To Prove His Worth At Sunderland