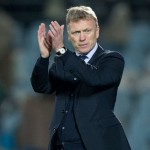 It has been reported that Sunderland could go after David Moyes at the end of the season.

According to the The Sun, the Black Cats have identified the Real Sociedad manager as the man to step in for Dick Advocaat in the summer.

It is believed that Sunderland will make a move for former Everton and Manchester United boss Moyes if they stave off relegation which now looks likely as they need just a point from their past two fixtures.

Advocaat replaced Gus Poyet at the Stadium of Light in March and has won three and drawn two of seven Premier League fixtures to lead the Wearside club three points clear of the bottom three but still his future with the Mackem remains clouded.

Moyes took over at Sociedad in November and has the Basque outfit sitting 12th in Spain’s La Liga.