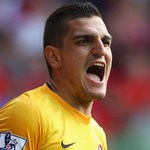 SUNDERLAND hope to sign Arsenal keeper Vito Mannone in time for the squad reporting back to pre-season at the Academy of Light tomorrow.

Yesterday the Black Cats were closing in on the 25-year-old Italian – back-up to the Gunners’ first-choice stopper Wojciech Szczesny last season – having agreed a fee with Arsenal at the weekend.

And with Mannone’s personal terms not expected to prove a stumbling block, Sunderland hope to have the move sealed inside the next 24-48 hours.

Ideally, the club would like to have him linking up with the rest of the Sunderland squad, whose first day back in pre-season begins on Wednesday.

Mannone, approaching the last year of his contract at the Emirates, is expected to cost £2m – exactly the same fee Simon Mignolet cost to bring to Sunderland from St Truiden in 2010.

But the Italian is not expected to blossom at the Stadium of Light in the way the Belgian did.

Instead he will be brought in to act as back-up to Keiren Westwood, who will be handed the first-team jersey in the wake of Mignolet’s departure and finally given a proper chance to prove himself.

Mannone was a £350,000 signing from Atalanta in 2005 but never really established himself at the Emirates and has been loaned out to Hull and Barnsley during his time in England.

Last season he made 13 appearances for the Gunners, considerably more than he has made in any previous campaign.

But Arsenal do not see him developing into a Champions League squad keeper, while Sunderland believe he is a reasonable acquisition as a more than capable deputy.