Reports are out claiming that Sunderland are in talks with Manchester United over a loan deal for Adnan Januzaj. 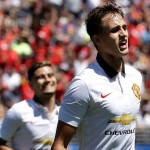 The Sunderland Echo reported that Sunderland have held productive discussions with United over Januzaj and they are hoping to seal a season-long switch which would provide a major boost to their attacking ranks.

Everton are also being linked with the Belgian.

Signing Januzaj would represent a major boost to Sunderland’s attack, which was the second worst in the Premier League last season, albeit the Black Cats have subsequently spent £8million on winger Jeremain Lens.