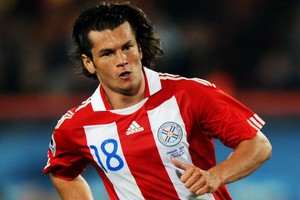 Transfer news from the Premier League is out and it is reported that Sunderland is ready to make a second bid for Borussia Dortmund striker Nelson Valdez.

Black Cats manager Steve Bruce is said to be keen on the Paraguay international and is ready to offer a £4.2million bid to get the 26-year old for a bargain basement price.

Valdez on his part has said that he is open to a move to the Premier League with Sunderland but admits that there will be plenty of competition for the English club.

Valdez said : “There is a lucrative offer from the Netherlands (PSV Eindhoven) I have received. But there is also interest from Russia, Portugal and England. My agent is weighing up options,”.