It has been reported that Sunderland striker Fabio Borini has reportedly been taken to hospital after collapsing at half-time of the Premier League match at Cardiff City. 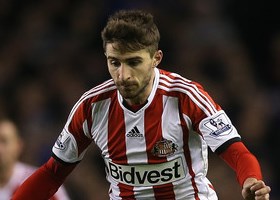 The Italian international striker, currently on-loan from Liverpool, was reported to have collapsed in the dressing room at the break and was immediately taken to hospital.

Various media outlets said the player was initially unconscious before coming around after treatment, but there was no official word from Sunderland, who are expected to comment after the match.

Borini seemed on form in the first half, having a few efforts well saved by David Marshall in the Cardiff goal.

The 22 year old came through the ranks at Chelsea before helping Swansea to promotion from the Championship in 2011. His form led to a transfer to Roma, who sold the player to Liverpool the following summer.

He has made 16 appearances for the Black Cats this season, scoring twice. Sunderland To Sign Kurt Zouma On Loan From Chelsea Sunderland On The Brink Of Signing Liverpool Striker Fabio Borini