Reports are out claiming that Sunderland are in advanced talks with Chelsea over a loan deal for Kurt Zouma. 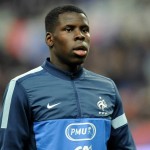 The 19 year old France U21 international signed for Chelsea in January before being loaned back to St Etienne for the remainder of last season.

Blues boss Jose Mourinho is now set to send the central defender on a new loan to Sunderland to continue his development.