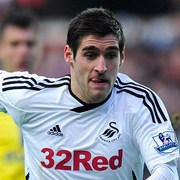 A brace from Grant Holt helped Norwich City stage a dramatic second-half comeback to snatch a 3-2 Premier League over Swansea City at the Liberty Stadium.

Danny Graham put the hosts in front before Holt equalised early in the second half.

An own-goal from Neil Taylor was added to by Holt as the Canaries moved 3-1 up, before they withstood a fierce comeback from the Swans, during which Graham scored a penalty and keeper John Ruddy denied the hosts with a string of saves.