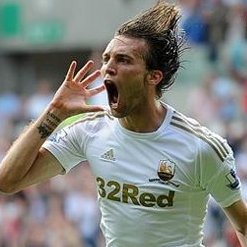 Swansea recovered from two goals down to draw 2-2 with Reading after dominating their Premier League clash at the Liberty Stadium.

Against the run of play, Reading stunned their hosts with first-half goals from Pavel Pogrebnyak and Noel Hunt, and an inspired showing from goalkeeper Alex McCarthy frustrated the Welsh side.

Swansea eventually gained reward for their 71 per cent of possession as Michu and Wayne Routledge netted late goals to salvage a point, and Reading were denied their first win of the Premier League season, though they can have no complaints after having seen their advantage eroded.