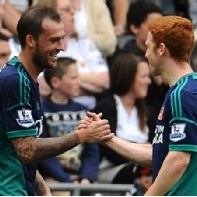 Fletcher, who joined for Wolves, started to repay his big-money fee as he struck twice in the first half, either side of Wayne Routledge’s effort for Swansea.

Michu scored his fourth goal in three games for the hosts to level matters, but they then lost defender Chico Flores to a red card for a wild and high challenge as the game ended all square.