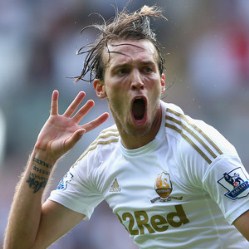 Swansea City sauntered to top spot after two games in the Premier League season when exploiting two horrendous errors from West Ham to win 3-0 at the Liberty Stadium.

With six points taken from six, eight goals scored and none conceded, Michael Laudrup’s remarkably impressive acclimatisation to the Premier League continues apace, though Swansea were gifted the game in the first half.

West Ham keeper Jussi Jaaskelainen was first guilty of a terrible lapse when turning an Angel Rangel cross into his own net on 20 minutes, and James Collins then outdid his team-mate with an atrocious back-pass that allowed Michu to sneak in and claim his third goal of the season.

Though West Ham enjoyed a more promising spell of pressure towards the end of the half, Swansea’s passing game clicked once again in the second and they opened up a three-goal advantage when Danny Graham tucked the ball away for his first goal of the campaign.