Reports are out claiming that Swansea City are chasing Arsenal striker Joel Campbell. 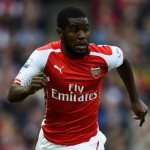 The Mirror reported that Swans boss Garry Monk is keen on the Arsenal forward who is likely to be allowed to go out on loan to get him more regular games.

Everton and West Brom are also keen on the Costa Rican international who has barely had a look-in at Arsenal despite his impressive form in the World Cup.

Campbell is well down the pecking order at the Emirates and is frustrated at not playing more, especially when they wouldn’t let him go out on loan last summer.